Deals with unit upkeep, martial law and unhappiness from city size. May allow units, partisan rules and senate rules. All enable +1 trade from each tile when 'celebrating'. All have an unhappiness cost for field units of 1.

Additional ideas perhaps have two further divisions, i hope it wont get too convoluted - but there could be default suggections. ps perhaps not everything goes to plan. Small changes might bring complacency to cities.

You rule by the consent of everyone. There is no unhappiness due to city size, however the incentives needed to get people to join your units and go into danger are prohibitently expensive.

You rule on behalf of the powerful in society, elected by those deemed worthy of suffrage.

Unhappiness from size 0, +2 each step. One unhappy free unit in each city each step. Martial law 1 content citizen for each unit. Luxuries +20% each step. Allows Knights unit.

You rule as a heavy-handed dictator, caring nothing for your people, who only exist to serve. You do not care that they hate you, as long as they fear you.

Unhappiness from size 2, +1 each step. Martial law 1 content citizens for each unit each step. Gold +20% each step. Allows Legion unit.

You are the elected leader of all your people. Your people slander you in the press and gossip behind your back, and your senate threatens to veto your spending bills. However, the freedom inspires creativity in your people and increases research and development.

You aim to rule not only the state but also the minds of the people. The total and unquestioning devotion of a whole people makes for awesome military might, but awful research.

You are the only governor and source of leadership and in control of power. Monarchy is the aristocratic form of autocracy.

Your citizens have freedom to associate and live the way they like, to prosper and populate lands. This society accepts immigrant settlers from other unhappy cities. eg resolution by increasing the local city population if the city gets other sttlers next to city

Your rule is open to the public opinion, and advise from the senate/court.

Upkeep is double. Victory gives a unit of gold as trophy. Conquered cities dissent if from democratic republics.

The mob rules the state. appears instead of Anarchy. Autocrats and Totalitarians are overthrown. Corruption and piracy are high.

Primitive or Utopian, as you happen to look at it, type of government. Everything is owned by everyone, and everyone work with everyone else to make stuff go around.

Slaves carry out most of the crucial work. As this frees up parts of society for more important work, it leads to a flowering of philosophy and science and makes it easy to produce great works, but is quite wasteful and lends itself best to highly centralized civilizations.

Large parts of the people live in serfdom, and work under special economic obligations, producing some for themselves and some for their patrons. This increases industrial innovation and production.

Food production +1 on all tiles with irrigation & Granary. Corruption 50% - 7% each step.

Valuables are in general privately owned, and those who do not own sufficient capital to live from rent, work for wages. Cut-throat competition between capital owners make for high production and innovation.

Trade production +1 on all tiles with road & Marketplace. Corruption 40% - 6% each step.

Everything is owned and managed by the state. Its planning commissions command the economy. This has the advantage of all factors in the economy pulling in the same direction, becoming capable of achieving singular goals much faster, but is rather inefficient overall.

PROPOSAL: This should be renamed collectivist because Market economy is also planned.

Additionally there could be Controlled economy that has longterm plans and spends most on production. No bonus for science. So scientists could be used for labour.

High technology and Democracy enable an economy that cares for each member and provides for their social security. Based on the ideas of social democrats. Unemployment assurance. Medical care. Progressive taxation.

Your society is awash with multitudes of different values and life goals. None is pulling in the same direction. No bonuses. No penalties. Should have a trading bonus, more market segments, as well as better connections to other markets.

Your society strives towards and prides itself in its power and territorial conquests.

Your society strives towards achieving knowledge of the world and of themselves. Being a value set of rather pacifist bent, it increases science production at the cost of unit support.

The members of your society care more than anything about each becoming wealthy, lavishing in riches. It is not unreasonable that some fall short of this goal, however, as in order for some to be richer, some have to be poorer. Gold income is increased at the cost of more unhappiness.

Gold production +20% each step. Wonder build costs +50% (large projects suffer a death from a thousand cuts as everyone wants their cut).

Your society reaches towards greater physical happiness as the goal of living.

A society shaped to accomodate literal interpretations of chosen religious texts. There is little tolerance of heretics, and trade of all kind suffers due to religiously imposed restrictions.

(thanks to 'briann' in the talk page for this idea)

PROPOSAL: Intolerance of heretics??? That differs from religious history. Most religions have taken advantage of the ideas of different thinkers. Often there is decision by a Convention if something new id found from the religions and the canon.

My advice is to leave it out and treat division in belief somehow.

This is a mockup of the Advanced Governments dialog by Hogne (based on earlier draft by Per): 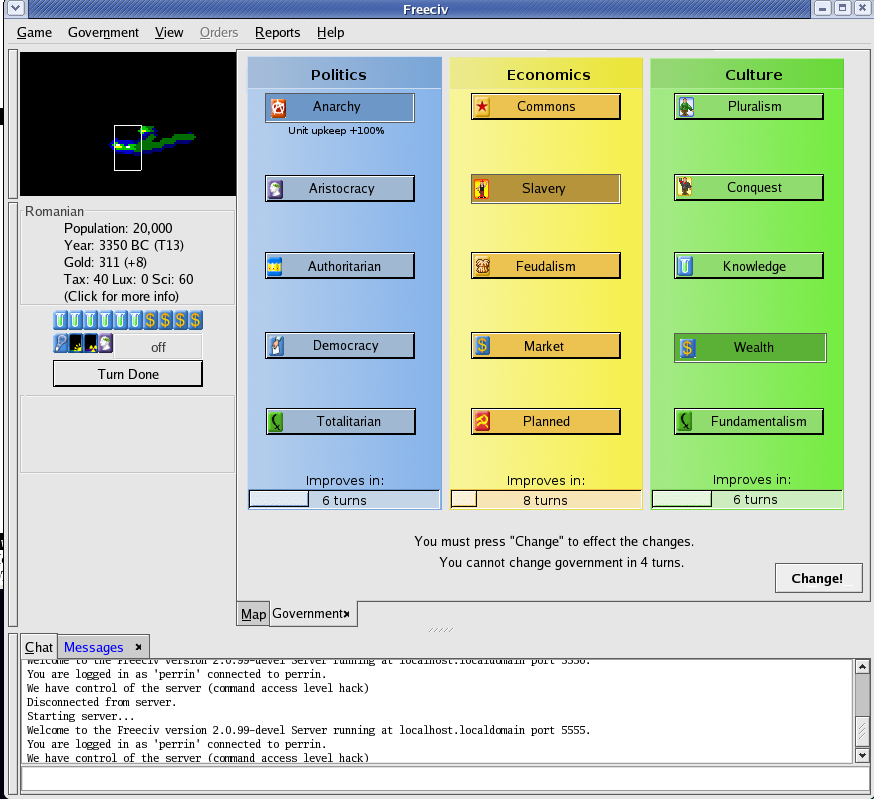 Civ1 and civ2 governments should be supported, using a single category of governments.