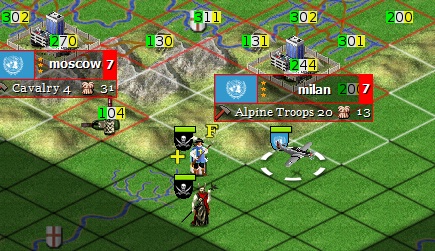 Barbarian Leader is an unbuildable barbarian-only unit that is generated once the barbarians uprise. This unit type has the role "BarbarianLeader" (only one such type per ruleset is allowed). The leader is non-military unit with no ZoC, and just rambles around with a group of the other barbsrians. If you catch Barbarian Leader standing out of a stack with certain types of your military units that can handle him gently enough (of a class marked with "CollectRansom" flag in the ruleset), then the barbarians will immediately pay ransom for him - typically you get 100 gold bonus but it can be bigger if the barbarian nation has more.

Being a barbarian unit, Barbarian Leader may retire any turn he's far from any enemies. He does it especially often on coasts.

A Barbarian Leader is not at all such valuable for his nation as a Leader of civilized nations - after killing one barbarians don't disappear, and there can be any number of Barbarian Leaders of the same nation at time. But one thing both Leader types have in common: a perfect political sense ("SuperSpy" flag) that can detect any hostile activity of a Diplomat or a Spy on his tile and terminate it with the actor. So, inciting a barbarian-held city that is usually mostly simple may suddenly face an obstacle insurmountable for your diplomatic unit. Also, in rulesets where it's allowed to bribe units from a stack, don't try to get rid of barbarian caravel hanging near your port by bribing it until it unloads - the Barbarian Leader is almost surely on board defending, you'll lose your Diplomat for nothing.

Back to Units manual page

Retrieved from "https://freeciv.fandom.com/wiki/Barbarian_Leader?oldid=34418"
Community content is available under CC-BY-SA unless otherwise noted.