Scenarios are in essence saved games. Some accompany the standard download (accessed by "Start Scenario Game") but you can create your own.

To convert a saved game to a scenario, move it from the local (per user) .freeciv/saves folder to .freeciv/x.y/scenarios or to the global (all users) data/scenario folder, and add a section [scenario] at the top of the file. For example:

For the tutorial and similar scenarios, where a map should be generated, remove all map data in the [map] section:

There are many differences between version 2.3 and older scenario formats, but as long as older scenarios can be loaded, they can be also saved in newer formats.

Typically you would use the "editing mode" in a started game to design a map, and "save scenario" to save your work.

Obviously this section is incomplete, please add what you know.

Some of the normal game options are not available, but many options remain, e.g. AI difficulty level, modpack, saved-file name, initial units (with some apparent limitation), distance between cities, tech and production and food multipliers, interval between autosaves, allowance of space race. 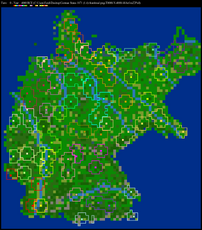 Europe 1901 WWI (old version)
Add a photo to this gallery

Retrieved from "https://freeciv.fandom.com/wiki/Scenarios?oldid=31578"
Community content is available under CC-BY-SA unless otherwise noted.