(This page is for Classic ruleset. For Terrain in the Multiplayer ruleset click here.)

By default, the Freeciv world is made of squares arranged in a rectangular grid whose north and south (or sometimes east and west) edges end against the polar ice, but whose other two edges connect, forming a cylinder that can be circumnavigated. Other topologies are available as a server option.

Each square contains some kind of terrain, and together they form larger features like oceans, continents, and mountain ranges.

Terrain serves three roles: the theater upon which your units battle rival civilizations, the landscape across which your units travel, and the medium which your cities work to produce resources. We shall consider each role in turn.

Terrain affects combat very simply: when a land unit is attacked, its defense strength is multiplied by the defense factor ("bonus") of the terrain beneath it. See the page on combat for details, and the catalogue below for which terrains offer bonuses. (Rivers offer an additional defense bonus of 50%, i.e. the terrain-specific bonus is multiplied by 1.5.)

Each unit gets a limited number of movement points for a turn that depends on its class and sometimes health, veterancy and its owner's advances and wonders; the points can be spent on any actions but they are not transferred between turns. A movement point contains a certain number of movement fragments (3 in Classic ruleset) that are the minimal quantums of movement. With at least one movement fragment, a unit may always move to an adjacent tile if it is possible at all.

Sea and air units always expend one movement point to move one square — sea units because they are confined to the ocean and adjacent cities, and air units ignore terrain completely. Terrain really only complicates the movement of land units.

Cities always have roads inside (unless the city is on a river tile and has never been owned by a nation with the bridge building technology) — and railroads, when their owner has that technology — which will connect to (rail)roads built adjacent to the city.

With bridge building, roads and railroads can be built on river squares to bridge them.

Squares within range of a city may be worked. Cities may be built on any terrain except Ocean or Glacier.

When cities work terrain there are three products, described further in working land: food points, production points, and trade points. These three are so important that we specify the output of a square simply by listing them with slashes in between: for example, "1/2/0" describes a square that each turn when it is being worked produces one food point, two production points, and no trade points.

Every type of terrain has some chance of an additional special resource that boosts one or two of the products. Special resources such as gems or minerals occur both on land and along coastlines. Terrain transformation can make resources inaccessible; for instance, if an Ocean square with fish is transformed to Swamp, there will no longer be a bonus from fish for that square. Players familiar with the commercial games may note that the dispersal of Freeciv specials does not have any regular pattern.

The catalogue below lists the output of each terrain, both with and without special resources.

There are several ways to improve terrain.

As soon as they are created, workers, settlers, and engineers can:

(but not both on the same square). Once built, a mine or irrigation system may be destroyed by further alteration of the terrain, if the resulting terrain is unsuitable for the improvement.

To irrigate land, the player must have a water source in one of the four adjoining squares, whether river or ocean or other irrigated land; but once irrigated, land remains so even if the water source is removed.

Terrain not suitable for irrigation or mining can often be altered to become more suitable to the player's needs — attempting to irrigate a forest, for example, creates plains (which can then be irrigated in the normal way). More radical changes ("transformation") are mentioned below.

Roads and railroads are improvements that have been mentioned under "Transportation". They can be built on the same tile as other improvements (such as irrigation). Note that roads and rivers enhance trade for some types of terrain, as shown in the catalogue below, and railroads increase by half the production output of a square (while also retaining any trade bonus from roads).

Both take three settler-turns to complete, regardless of terrain. Only workers and engineers can build airbases.

After Refrigeration has been researched, irrigated tiles can be improved again by building farmland (at the same cost as irrigation), increasing by 50% the food production of the tile if the city working it has a supermarket.

Only engineers can directly transform land, with the results detailed in the catalogue below. For transforming swamp to ocean, one of the eight adjoining squares must be ocean already. To allow transforming ocean into swamp at least three of eight adjoining squares must be land. Load the engineers on a transport to move them on the right place on the ocean. The new swamp will have a river if built adjacent to some river square's single mouth. Note that buildings that require certain terrain class or type (but not flag) will be automatically sold in a city if these requirements are not met at the moment when a tile adjacent to the city changes its terrain type for any reason. (In civ2civ3, such buildings are Coastal Defense and Port Facility.) Also, most naval units automatically disband if they stay in landlocked cities.

Note that engineers have two movement points per turn to invest in their activities (moving or static), and thus complete all improvements in half the number of turns specified in the catalogue.

Two or more units working on the same square under the same orders combine their labor, speeding completion of their project.

When a unit's orders are interrupted (which can be done just with a click on the unit), its progress is lost. This will also happen if the unit's former home city is conquered or destroyed. 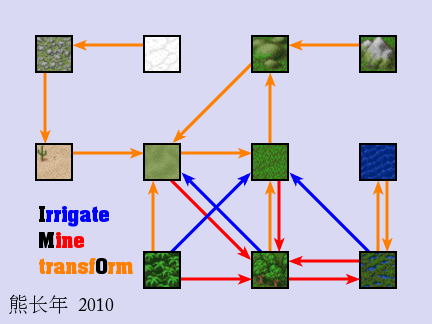 The user who hosts the game has the option of including up to 500 villages (also called huts), primitive communities spread across the world at the beginning of the game. Any land unit can enter a village, making the village disappear and deliver a random response. If the village proves hostile, it could produce barbarians or the unit entering may simply be destroyed. If they are friendly, the player could receive gold, a new technology, a military unit (occasionally a settler; and sometimes a unit that the player cannot yet create), or even a new city.

Later in the game, helicopters may also enter villages, but overflight by other aircraft will cause the villagers to take fright/flight and disband.